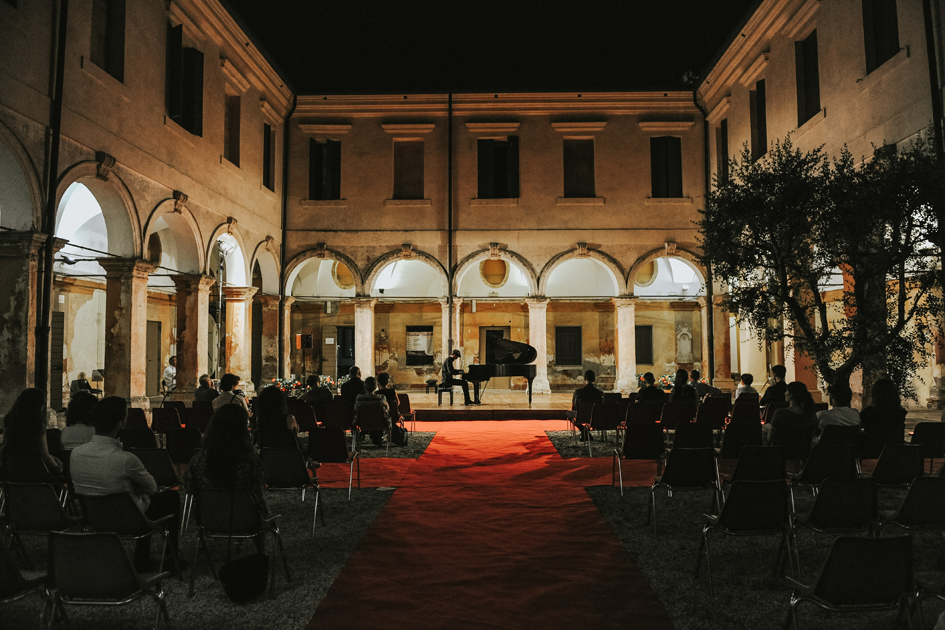 Castelfranco Veneto’s Conservatoire “Agostino Steffani” is a State Institution of High Culture (Istituto d’Alta Cultura) originally founded in 1969 as a separate branch of Venice Conservatoire but subsequently gaining independence in 1980. The conservatorio’s main premises are situated within the walls of Castelfranco’s medieval centre and are dominated by Villa Barbarella, which houses the academic and administration offices as well as teaching classrooms. Owing to the increase in student enrolments, further conservatoire premises have recently been established in another historically interesting setting; the recently restored rooms of the ancient Convent of the Cloister “dei Serviti”.

The conservatoire has about fifty teaching and practice rooms and also has a studio for electronic music, a conference and concert hall that seats seventy, a music library with separate audio-visual facilities. Il also has staff and student rooms with computer and internet facilities. Concerts, lessons in orchestra and opera studies and many other conservatoire activities take place in another historically interesting place; Castelfranco’s beautiful eighteenth century “Accademico” theatre.

Castelfranco Veneto Conservatoire offers a very wide range of instrumental studies, including instruments not normally taught in other conservatoires such as accordion, viola da gamba and celtic harp.

Deadline for admissions to the 1st and 2nd level degrees (Triennio and Biennio) and useful information:
To enroll in the Conservatory application must be made using the forms by 31 May of each year.
The entrance exams are organized in the last days of June and possibly early July.
In mid-July the Conservatory report the numbers of places available on the basis of which the candidates in a good position in the ranking can immediately enroll (by 30 July). On the same date the Conservatory communicate for each course of study the possible extension of the deadline for acceptance of new applications with deadline 10 September only remaining places. Any second admission will take place in the last days of September, and possibly the first of October.

The EU countries who do not want to show up at the first session of exams can be sent by May 31 for admission related to a curriculum and a DVD with a recording of your performance by at least 30 minutes. In the case of materials composing the candidate must submit at least three scores with his statement to be the author.
Based on the documentation sent to the Academy announced the list of candidates for the entrance examination to be held in late September, to coincide with the second session of admissions and close to the start of classes (October 15). Non-EU students must in any case be already in compliance with the formalities required by the law and have a good knowledge of the Italian language. For further information please visit http://www.study-in-italy.it

To apply for 1st cycle programmes of study it is necessary to hold a secondary school qualification.
Admittance will be based on the entrance exam results.

To apply for 2nd cycle programmes of study it is necessary to hold a 1st cycle degree (Bachelor).
Admittance will be based on the entrance exam results.

Students holding a 1st cycle qualification issued by university or university-level institution can be admitted if their diplomas grant access to 2nd cycle courses in the Higher Education system of reference.

About Castelfranco
Castelfranco Veneto owes its name to the castle 'frank' (exempt) from taxation for its first inhabitants-defenders. The imposing red brick square was erected over an existing embankment, at the end of the twelfth century by the city's medieval Treviso, just north of the village of Pieve Nova, on the east bank of the river Muson, in defense of the turbulent boundary to the lands Padua and Vicenza.
Already in the first decades of the fourteenth century, on the eastern side, it develops the first inhabited nucleus (Bastia Old) tool also of defense, with a poorhouse and viandanti.Walled city by its very definition, preserves almost the entire city walls and six towers that rise to the four corners and midpoints of the east and south. Castelfranco Veneto inextricably linked to its eight hundred years of history to its strategic location in central Kansas: must see in Venice, Germany and Flanders, between Western Europe and the Eastern plains. City of businesses from the outset and the seat of an ancient market of grain and cattle, active until the middle of the last century it was the center, in the past, the most varied craft activities and railway junction of the late nineteenth century to the first level present day.It was the seat of the Venetian Podesta 1339-1797, country, between the seventeenth and eighteenth centuries, men of science (James, Jordan and Vincenzo Riccati), architects (Francesco Maria Preti) and musicians (Agostino Steffani) of wide fame, Castelfranco Veneto is known worldwide for being the birthplace of one of the most extraordinary and enigmatic figures in the history of painting: Giorgione (1478-1510), the mysterious genius of light and color. Giorgione, the fort encloses almost casket, two gems among the few recognized the painter: the hermetic Frieze Casa Marta-Pellizzari and renowned altar of the Cathedral of St. Liberal.
Walled-city of Giorgione: This is the two-faced icon of Castelfranco Veneto, embossed, yesterday and today, in the eyes of astonished and enraptured poets, writers and travelers everywhere.